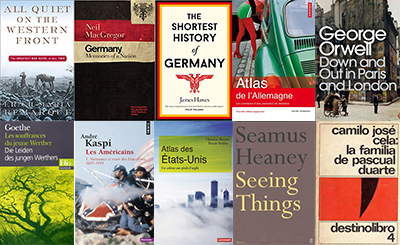 Having changed jobs to teach modern languages, I have been busy reading a lot of professional literature the last year or so, which has given me little free time for other readings. Additionally, 2017 was somewhat of a disappointing literary year. Still, there were a few standouts.

As I had said last year, I wanted to work more on Germany in 2107. It all started well with “Memories of a Nation” by Neil MacGregor, which I had begun at the very tail end of 2016. Based on an exhibit at the British Museum (see also the BBC web page about it), this book proved to be by far one of the most interesting things I have read in a while. Admittedly, being from a German background, I am partial but the book has been very well received overall. It is a fascinating discovery of the German-speaking world (Germany became a country only in 1871) through arts and culture. Besides the obvious 20th century horrors and tragedies, you’ll read about Snow White, Goethe (isn’t “One Nation Under Goethe” a brilliant chapter title?), Charlemagne, Strasbourg, “One people, many sausages” (kudos again for whoever came up with the chapter titles), the Hanseatic League (guess what LuftHansa refers to?), etc. If you can afford it, get the hardback edition. The maps, pictures and illustrations are well worth the price difference. A must read, in my opinion, for anyone interested in the German-speaking world.

I also reread some chapters of Gordon A. Craig, The Germans (1991), which I had gone through in the nineties. Despite its age, the book remains quite interesting.

Also interesting but which left me with mixed feelings is The Shortest History of Germany by James Hawes. With just about 160 pages, it is short indeed, but two thirds of the book really cover only the last couple hundred years. The title is therefore a bit of a misnomer, as titles are prone to be. If you do not know anything about Germany, this will probably be way too much information at once. In such a short book, expect a lot of dates but not much contextualization, of course. In my opinion, Hawes makes too much of the Roman Limes, as the limits of the Roman Empire are often called now, as an explanatory factor of the differences between the Western and Eastern parts of Germany. Overall, still a nice quick historical summary of the last two hundred years but not a reference book.

Totally different, but still about Germany. “L’Atlas de l’Allemagne” by Michel Deshaies. This atlas is part of a visually well designed French series of atlases on a wide range of topics (see the collection here). By Atlas you should not understand “geography maps” only. As you can see if you flip through the volume, the book covers issues about the population, history, demography, immigration, culture, economy, etc. of Germany. The reference list at the end offers a nice survey of books, web sites and so forth. The latest edition of the atlas dates back to 2013. So it is quite up to date. A worthwhile investment of money and time.

After having had the book for several years on my to read shelf, I finally read All Quiet on the Western Front by Eric Maria Remarque. Originally published in German in 1928 in a newspaper and in 1929 as a book and banned by the Nazis this has deservedly become a classic on the cruelty and sometimes senselessness of war. A couple of quotes to give you an idea of Remarque’s perspective. “At the head of the queue of course were the hungriest—little Albert Kropp, the clearest thinker among us and therefore only a lance-corporal…” (3). “A hospital alone shows what war is.” (263). This book reminded me of Tolkien’s perspective on war, sometimes inevitable but never to be glorified:

“The utter stupid waste of war, not only material but moral and spiritual, is so staggering to those who have to endure it. And always was (despite the poets), and always will be (despite the propagandist)—not of course that it has not is and will be necessary to face it in an evil world.” (Tolkien, Letter to Christopher Tolkien, April 1944)

Last reading related to Germany: Goethe! After having enjoyed several of Goethe’s works in the last few years, I went through “The Sorrows of Young Werther” in a “The Sorrows of Young Werther” German-French bilingual edition.
Partly autobiographical, the book was a turning point in Germany and in the romantic literature. Much maligned for seeming to advocate or at least banalize suicide, it also “disenchanted” nature. Eventually God does not answer Werther’s prayers and nature does not turn his heart to God anymore. After the publication of the novel, a Werther mania spread all over Europe. People dressed like Werther and many where those who profiteered from Werther merchandizing—get your own Eau de Werther or wax figurines!

I keep on reading about the United States. I finished André Kaspi, “Les Américains,” volumes 1-2, which I had started in 2016. This is a well-known book on the USA and the Americans from a French perspective. Kaspi is an expert on the United States and offers a historical documented perspective that should help French-speaking readers deepen their understanding of the USA and get another perspective on it. Overall, I would definitely recommend both volumes if you read French.

Atlas des États-Unis. In the same series as the “Atlas de l’Allemagne”. Well worth the price and the time if you read French and are interested in the United States. This one too can be flipped through.

Other good reads were:

Well that’s about it for 2017. 2018 is already much better than 2018 with Moby Dick (for the second time), Kafka, but also Lee Child again and my first time reading Simenon!