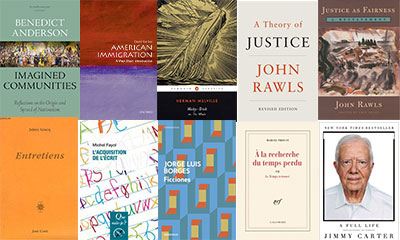 After a survey of my best readings of 2016 and 2017, time has come for the 2018 edition. Once again, I had meant for this to come out in a timely manner in January. Maybe next year. After a less than lackluster literary 2017, 2018 proved to be a richer crop: more diverse and with a few good surprises as well as a few comforting old friends.

Though French is my first language, I have not read much French literature lately, except for a couple favorites: Julien Gracq and Marcel Proust. In 2018 Julien Gracq was on my roster again with his Carnets du grand chemin, a gathering of notes on traveling across land and memory through the decades, and his Entretiens, a series of interviews dating from 1970 to 2001. A plus for me in the latter was to discover how much he appreciated Tolkien.

I also finished my second reading of Proust’s “Recherche” with the seventh volume: Le temps retrouvé. Reading this seventh volume is reall a ke to unlock the whole of the “Recherche.” Therein Proust comes back to several themes and episodes of the previous volumes (the madeleine being one of them) and develops his theory of the place of art and literature in becoming aware of what life is all about. Since 2019 marks the centenary of Proust receiving the Goncourt prize for his second volume of “La Recherche,” now might be a good time to try reading him (again).

A marvelous read was Racine’s Andromaque (available in many editions), which I am ashamed to say I had never read. Homer being one of my recurring readings, time had come to read “Andromaque.” A marvelous read for its language and plot. “Andromaque” is a play. Like poetry, it therefore pays to read it aloud (when alone at home or somewhere in the countryside while resting from biking!).

After visiting Prague for the first time in 2018, I thought it was time to honor its local literary hero, Franz Kafka. I had begun “The Trial” many years ago but never finished it. This time I read it (in French) as well the Metamorphosis in the bilingual edition, first in French than in German. Kafka needs no introduction. He may seem odd at first, but perseverance definitely pays off.

To keep up with my Spanish (I studied English/Spanish in college), I have been trying to read one book in Spanish a year for a while. Borges’ Ficciones, was my choice for 2018. I had first heard of Borges during my translation studies in the 80s and I had read “The Library of Babel,” probably the most famous piece in this book, many years ago. Going through the whole volume over the course of several weeks was a refreshing experience, not only because of the language but also because of the magical world the “Ficciones” evoke and create. I was struck by the recurring theme of books, manuscripts, and libraries in several of the stories.

The big one in this category in 2018 was Herman Melville’s Moby-Dick. I first heard about “Moby-Dick” in the 70s through Led Zeppelin’s famous drums solo. I learned afterwards in my American Literature course in college that it was actually an American classic. I eventually read it years later, or so I thought. A while ago I came across a copy of it in a used bookstore and noticed that at around 700 pages, it was strangely longer than my home edition. It was then that I realize that our home hardback was a shortened version (still over 300 pages long and very enjoyable) that failed to mention that little detail anywhere. I grabbed the used Oxford Classics paperback for a couple euros and read it last year.

I very much enjoyed the novel, though, honestly, not every single chapter of it. If you do not mind skipping over some small treaties on zoology, whales, extended explanations on whale hunting in the early 19th century, and so forth, it is a marvelous study of human nature and, as many have said, a piercing look at the United States of those days. Moby-Dick was written as Melville became increasingly worried about the direction his country was taking. Little did he know ….

Here and there one finds some very poignant episodes: Ahab’s meeting with the boat The Rachel which he refuses to help, the three-day hunt for Moby-Dick at the end, Queequeg’s survival in a coffin in the water, his salvation by none other than the Rachel, Starbuck’s longing for his wife and family, etc.

Given the recent polarizing positions on immigration, I went through American Immigration, David A. Gerber. A good introduction to immigration in the USA (history, attitudes, emotional and irrational perspectives, empirical data, most important legal milestones, etc.) up to 2011.

After visiting the Jimmy Carter Library and Museum in Atlanta during our summer stay in Atlanta (my first visit of the Center was over twenty years ago), I thought Jimmy Carter, A Full Life would make a nice summer read. This is not the first book on or by the former president of the USA that I have gone through. I had actually written a paper on Jimmy Carter during my college years before moving to the USA. Little did I know that I would end up living several years in Georgia and regularly go back there for the next 25 years.

Given my interest in political philosophy, I have been working through a few classics. I will not comment on those since I hope to expand on them at some point here and there. It is striking to see how Kant, Rousseau, Hobbes, Locke, etc. are still influential today, if only indirectly. There is something to say about reading primary sources first.

For a French-speaking (Belgian) survey of some contemporary political philosophy issues see “État des lieux de la philosophie politique,” Geenens and Braeckman in the Revue Philosophique de Louvain (if you can get access to it): part one and part two.

Since I teach languages, I try to keep up with the field. Besides quite a few articles, the two most interesting books I read last year were Michel Fayol, Jean-Pierre Jaffré L’orthographe and Michel Fayol, L’acquisition de l’écrit.

Many people say that French is a very hard language to learn. Actually, if you compare it with Spanish, Italian or Romanian, what is particularly problematic in French is writing and spelling. This is due to the fact that, just as is the case in English, there is a great difference in French between what we write and what we say. These two books really helped me be aware that teaching and learning spelling is more than a question of awakening dedication, discipline, attention and hard work in students. A lot of phonological, psychological and other problems are also involved and much research is being carried out on these issues.

There were many other readings in 2018, of course: Lee Child as usual, but also a couple of the Shetland and Vera stories by Ann Cleeves, and my son’s Locked in Time short story.

The year 2019 has already started well with the Maisky Diaries, Tolkien: Maker of Middle-Earth, Michelle Obama’s Becoming, The Night Manager, etc. More on these next year.