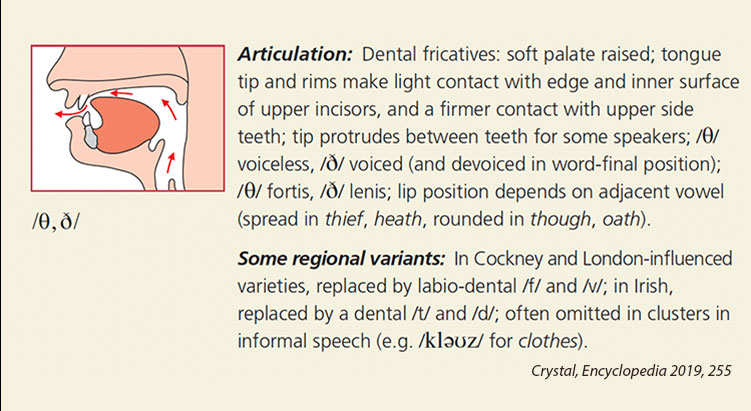 The English “th,” the dread of so many ESL and EFL learners. Tricky to learn and to teach as it means pronouncing sounds unused in many languages.

It is possible to speak English correctly without mastering the pronunciation of the “th.” Some specialists do not consider teaching it a priority (famously so Jenkins 2000 and 2002). Yet, mastering the “th” is often a request from the learners themselves, not only to sound more “native” but also to feel more confident about their overall pronunciation. Additionally, since the “th” is quite frequent in English, its repeated mispronunciation may be irritating to many people. Finally, in some cases, this can also lead to misunderstandings. One thinks of examples like fin-sin-thin, tick-thick-sick, or thinking-sinking as in this famous Berlitz commercial.

First, I make a distinction between the letters “th” and their pronunciation. You often hear or read about “the pronunciation of the th sound.” This is a misnomer. “Th” is not a sound, but a cluster of two letters that are pronounced in different ways. This may sound trivial, but it has pedagogical consequences.

Second, I do tell my students that “th” is not pronounced in two ways as is generally said, but in three: /t/ as in “Thames, Thyme”; /θ/ as in “think, mouth”; and /ð/ as in “this, mother,” at least overall in the UK and the USA. Granted, very few words use the /t/ pronunciation, but there is no reason to skip it altogether. I have had students confused when they heard a /t/ in “Thames or Thailand,” convinced as they were that their only two choices where /θ/ or /ð/.

This is the easiest one to teach, albeit the least common. In this case “th” is simply a regular dental /t/. But remember that the /t/ is not pronounced with the tongue positioned exactly the same way in all languages. Depending on their L1, some learners might therefore need a little help with this sound too.

The other two pronunciations are much more common and are the ones dreaded by many learners. Again, there are no simple rules to decide which one to use but usage shows patterns. For example, many function words like “the, this, these, that” use /ð/. The voiced /ð/ is also more common in the middle of words, while /θ/ is generally more common in the beginning or at the end. The endings “-the” in verbs (“bathe, breathe”) and “-ther” in nouns (“brother, mother”) are usually pronounced with /ð/.

One reason for the difficulty some have in saying /θ/ and /ð/ is their proximity with similar sounds in their language (/s, z, d, t/, etc.), which is a possible source of confusion. Another reason is that few languages use these fricatives. They are found in Arabic, Greek, Spanish (mostly θ but there are many contexts where ð or a very similar sound is used, see Gómez González 176, 191–192), and a few others, even if they are not always pronounced in exactly the same manner.

Of course, given the worldwide use of English and for various reasons, not all native English speakers pronounce “th” as fricatives, not even in the USA and the UK.

Once you start digging for information on /ð-θ/, things get confusing, and this has consequences on how you learn and teach them. It may be a surprise to many people, but there are three approaches to /ð-θ/: they are either classified as dentals, interdentals, or … both. 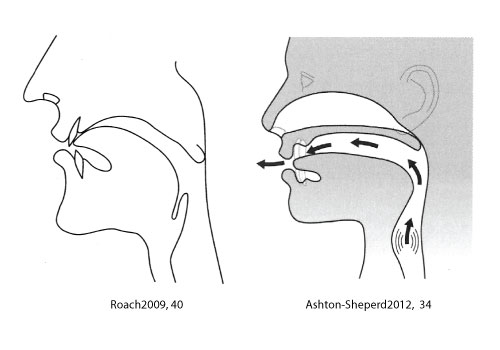 The sounds /ð-θ/ are often said to be interdentals, that is, pronounced with the tongue sticking out between the teeth, even if ever so slightly (ex. Ashton-Shepherd 34-35, Avery-Ehrlich 24, Baker, 151, 155, Pennington 93, 149). It is the pronunciation in the picture above right and the one often taught by teachers and countless videos on YouTube. How far the tongue gets out varies widely. Learners are often told to exaggerate sticking their tongue out just to get used to this unusual position. This is the de facto option dreaded by so many. But it does not have to be so.

If many people take /ð-θ/ to be interdentals, this is not the approach commonly recommended in most standard works on English pronunciation. They are usually said to be dentals, not interdentals, i.e. pronounced not with the tongue sticking out between the teeth but staying inside the mouth close to the ridge of the upper teeth. You can see this in Roach’s illustration and in the picture of Crystal’s Encyclopedia illustrating this article (so, among many, Celce-Murcia 57, 61, Gómez González 188–189, IPA Handbook ix, 41, Jones 9, Saussure 73, Underhill 39). It is sometimes said that the interdental pronunciation, at least of /θ/, is more American. But even that is not clear since Celce-Murcia (dental) is based on American pronunciation and Ashton-Shepherd (interdental) on RP pronunciation.

For most standard works in English pronunciation, no, you don’t have to bite your tongue between your teeth or stick it out for all the world to see it to pronounce /ð-θ/ correctly. They are dentals not interdentals.

It is indeed possible to speak English and keep your tongue inside your mouth most of the time. If you look, for example, at this interview of Adriene Mishler, the YouTube guru of yoga, she keeps her tongue inside her mouth at all times except at 1’52” (don’t ask me why I picked this video. For whatever reason it was suggested to me by YouTube and I don’t even do yoga, though maybe I should).

If you look carefully, you will see that many promoters of the interdental pronunciation actually switch to a dental or close to a dental position when speaking at normal speed. It’s just not easy to speak at a regular speed and stick your mouth out all the time!

This hesitation between dental or interdental is not found in English only. In Spanish, for example, the Dictionary of the Royal Academy of Spanish consistently presents /θ/ as interdental (but with very little sticking out) but signals that there are variants (RAE 5.2 and 7.1b, see also Hualde 33).

How I do it

Does all this matter at all? Whether we consider /ð-θ/ to be dentals or interdentals, the fact is that both pronunciations are found, though I would venture to say that the dental position is much more widespread in normal speech. As long as you don’t stick the tongue out too much, there is actually not much difference in the outcome of both pronunciations.

As to more practical exercises and how you actually pronounce these sounds and help the learners do it, that’s the subject of the article on How to pronounce the “th” without sticking your tongue out.